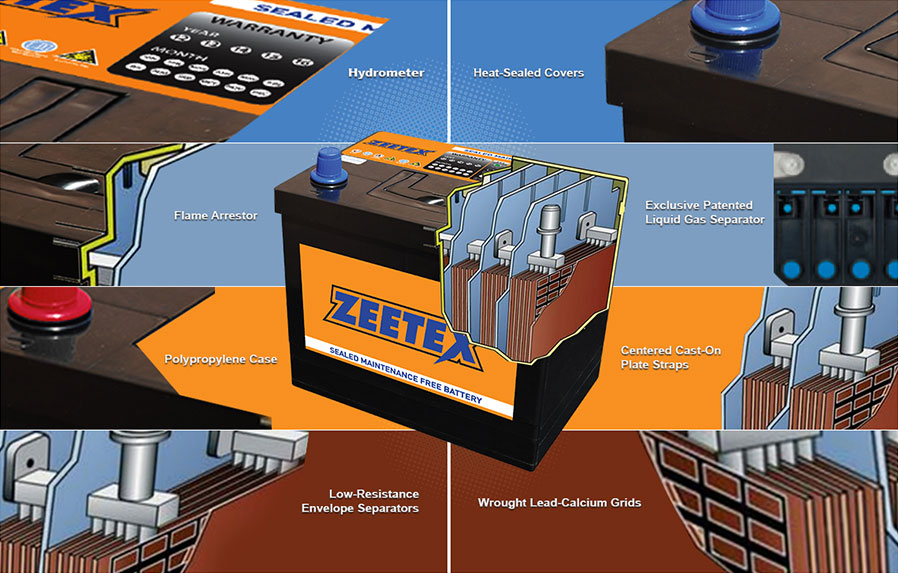 No need to Distilled water

Zeetex batteries use special alloy calcium lead for minimal fluid loss (less than 1/10 of other batteries) meaning that there is no need to replenish distilled water throughout the life of the battery.

The use of calcium alloy grids and low resistance envelope separators means that Zeetex batteries have 20% improved charging ability compared to other batteries, even during intense heat or cold.

A mounted hydrometer allows you to check the status of the battery.

Special alloy grids prevent corrosion and extend the life of the battery (with) making it the economically practical choice.

The local action of conventional lead-antimony batteries, due to the effects of the antimony ions during battery use, electrolyzes battery fluid (electrolytes) into oxygen and hydrogen to deplete the battery of fluid. In such conventional batteries, users need to replenish the battery with distilled water or risk the deterioration of battery performance and life Zeetex batteries, however, use a special alloy calcium-lead, which leads to extremely low levels of fluid loss. Hence, as long as the charging system of the car remains error-free throughout the life of the battery, there is no need to supplement the battery with distilled water.

The phenomenon of self-discharge causes lead-acid batteries to consume charged power, even when the battery is not in use (i.e. during storage). This is due to the impurities contained in the lead alloy, which induces local action and, thus, consumption of electrical energy. Zeetex batteries, on the other hand, uses highly-refined, hand-selected lead alloys that render extremely low rates of self-discharge and maintains high battery performance even after long periods of disuse.

The Battery mounted on vehicles can always be charged while vehicles are in operation. In general, the current being charged is adjusted to high or low level by the regulator which controls the size of voltage.
When Battery is in the state of near full charge under the condition of voltage already set, the value of current being charged must be decreased to prevent battery from being overcharged to maintain high performance for a long time. as shown on graph, the charging current of Zeetex calcium battery is reduced to extremely low level when the battery is in near full-charge state, eliminating to near zero the danger of battery being overcharged.

When battery is near full-charge state while battery is being used in hot places (temperature approximately 70 C), the current being charged must be decreased to prevent battery damage resulting from over charging. The charging current level of lead-acid battery decreases at initial stage but raises again due to the effects of a few kinds of substance contained in the grid alloy, and the grid is damaged and performance deteriorated due to this thermal phenomenon. ZEETEX Battery, however, is free of substances containing such harmful effects, and the current being charged becomes extremely low level when battery is fully charged in high-temperature, leading to the prevention of overcharging.